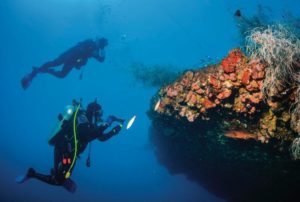 In trying to come to an understanding of this of problem of Real World vs. Digital environment I propose the following hypothesis. If the same basic rules (first principle concepts) apply to both the digital and physical environment, then the two environments can be considered as a seamless coherent whole.

Let us start by using a scenario where there are definitely two different sets of rules for each of the two environments within the scenario.

A scuba diver and a rock climber both have identical physical laws of gravity (g = GM/r2) but differences in their respective environments (water and air) will profoundly affect how they behave should they be asked to jump off a hundred-meter-high ledge within their respective environments. The scuba diver will happily ‘jump’ off because there is buoyancy in his/her environment. The rock climber on the other hand will be reluctant, seeing death as the inevitable conclusion should he/she jump off the ledge. While gravity is the same for both parties within the physical environment, the way they experience the effects of gravity is profoundly different within each environment. Environmental differences therefore have a profound effect on behaviours. Now consider the same scenario in the digital environment. Will the human/avatar jump of a cliff in the game? Sure because even if the player does not have enough points they can always start the game again.